In the digital era, what attracts people to libraries isn't just knowledge anymore. They also have to look good.
Andrea Lo
Monday 30 April 2018 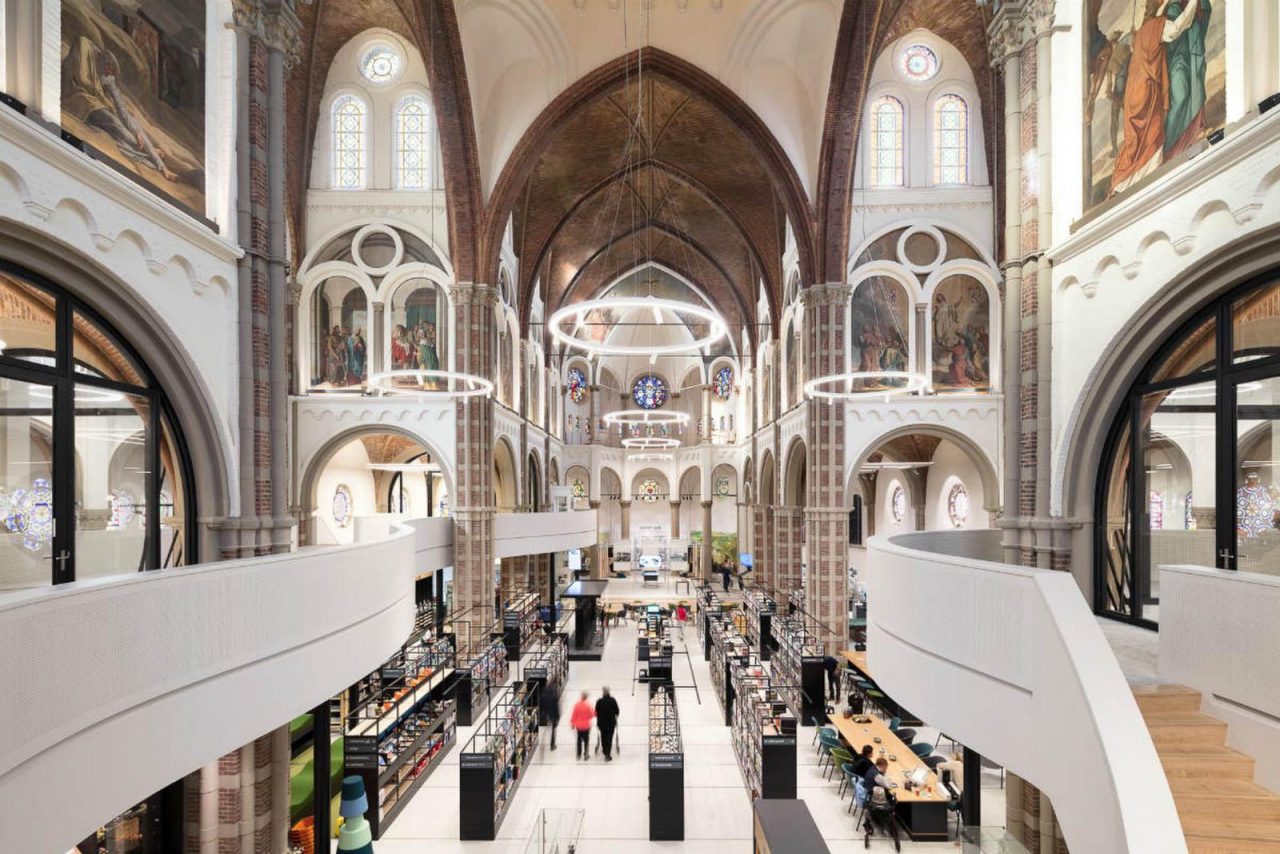 With today’s digital reading habits, it’d be easy to assume that libraries are on the verge of becoming redundant. But as a new wave of these buildings open around the world, the humble library is reinventing itself as an establishment for the modern age.

In Doha, the Qatar National Library was unveiled this month – a glitzy 42,000-square-metre space designed by Dutch architecture firm OMA, it’s a new landmark for the city.

In the Netherlands, meanwhile, a 19th century church, which has been painstakingly converted into a library, opened its doors this year.

Across the world in Tianjin, in northeastern China, the futuristic Tianjin Binhai Library was unveiled in late 2017. Its eye-shaped atrium was designed to be a “new urban living room.”

“We designed this (space) as a public library for modern information,” Ellen van Loon, who designed the Qatar National Library with Rem Koolhaas and Iyad Alsaka at OMA, tells CNN. Of the part of the building that looks like an excavated cave, inspired by local archeological sites, she adds: “It’s not just another modern building somewhere in the middle of a country – this basically connects the building back to the culture. It’s a very different experience to going on the internet.”

“You will be inspired by things you didn’t think about before you entered the library.”

The Qatar National Library bears almost no resemblance to the musty libraries of yesteryear. Its cutting-edge aesthetic includes a diamond-shaped exterior, while inside its open-plan space can accommodate thousands of visitors.

“The advantage of designing a building as one big room (is that) … when you enter you can see all the books in one go,” van Loon says.

Inside, over one million books are available, housed in bookcases which are stacked on different levels, creating a terraced effect. A “people mover system” – essentially, a wheelchair-friendly sloped elevator – takes guests to the level they want to get to.

In the heart of the space is the heritage section featuring more than 4,000 manuscripts on Arab-Islamic civilisation. One of the oldest tomes dates back to the 6th century.

It’s a library for the modern era. The Qatar National Library has an automatic system to send returned books back to the section where they belong, and all books are search-able digitally, van Loon explains.

“Libraries need to remain relevant and attractive, and design can help them appeal to people from many different backgrounds,” says Jamie Andrews, head of culture and learning at the British Library in London. “In our digitally enabled age there’s a continuing desire for public spaces which allow people to work and study together,” he adds.

At the British Library, Andrews says that they’ve seen an increased number of people using the public spaces since free WiFi became available.

The library’s physical space remains relevant, too. “The purpose of a national library has been transformed – in some respects liberated – by the internet. As well as putting more of our collections online, we find there’s also an appetite for things that are original and authentic.” That includes items such as Beatles manuscripts, as well as a writing desk that once belonged to author Jane Austen, which are among the British Library’s most popular attractions.

In Vught, a town in southern Netherlands, a church built in 1884 was transformed into a library with sliding bookshelves that house thousands of books.

The library, which forms part of the De Petrus Meeting Center, preserves the church’s original layout and design details, such as its arched roof and stained glass windows. There is, however, a newly built mezzanine floor of 5,380 square feet (500 square metres) where a study area and meeting rooms are located.

The idea for the transformation came from the local community. “Because the building was empty for several years, it was in bad shape,” explains architect Ivo van den Thillart, of Dutch firm Molenaar & Bol & van Dillen Architects, which was responsible for the project. “They wanted to save the church from demolition.”

While the church is privately owned, the local government subsidised the cost of building the library. The rest of De Petrus, which occupies 32,291 feet (3,000 square metres), contains a community center and museum, as well as bars and shops.

“The function of modern libraries is not about dimmed light and endless rows of bookshelves,” says van den Thillart. “At De Petrus, people are encouraged to come in (by) its attractive design and good facilities.”

“The goal was not to create a spectacular design, but a functional design,” he adds. “De Petrus library provides visitors with a comfortable place to read and study away from modern distractions.”

Perhaps a sign that libraries are not yet obsolete was the $12 million facelift which the iconic New York Public Library underwent in 2016.

Van den Thillart says that libraries today, such De Petrus and New York Public Library, are becoming destinations for those seeking knowledge in “every possible form and format.”

“Once inside, (visitors) attend lectures and concerts, or study,” he says. “In this way the library is shaping the way we learn things and enjoy books in the digital age.”

And while their design may be modernising to reflect their updated facilities, Andrews believes the original uses of a library remain as important as ever.

“Crucially, there’s still a huge amount of material that people can’t access online – either because of usage restrictions, or because it’s not available in digital form yet,” he says. “That being the case, there will continue to be a need for reading rooms where people can access such materials for free for the foreseeable future.”

Related: The Way You Travel is Going to Change from Now On

Soon, You’ll Be Able to Rent Furniture from Ikea
By Lainey Loh