In The Food For Love

Aphrodisiac food gets a splash of Shakespeare –“To eat or not to eat?”
Li-Mei Foong
Friday 8 February 2019 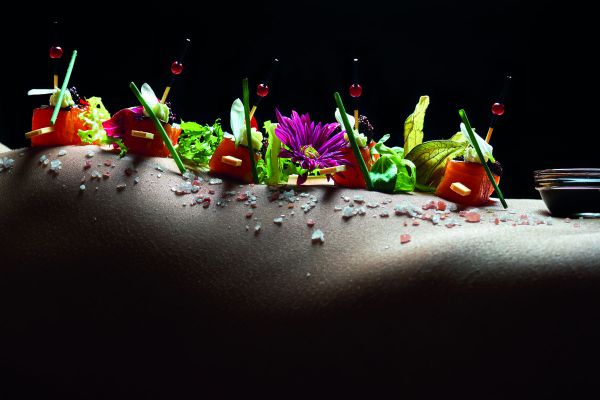 We are talking about sexy food that supposedly gets one in the mood – carrots for the Romans, eels that the Japanese swear by, milk as prescribed in the Kama Sutra, honey mead drank by medieval European newlyweds, and cobra blood for the Chinese. Many believe in the suggestive forms of bananas, asparagus, lotus roots, and sea cucumbers to bring sexy back. Others trust in tiger penises and bull testicles to compensate for the lack in the sack.

Sex does not discriminate. Or, at least, the quest for sex doesn’t. Aphrodisiac status has been granted to both the humble potato and the prized caviar. So how does a particular food get picked as a virility cheerleader?

Legends help. The word ‘aphrodisiac’ came from Aphrodite, the Greek goddess of sexual love and beauty. Her origin from the ocean lends shellfish like oysters and lobsters a salacious sheen. Chocolate is also credited as the fuel for Aztec ruler Montezuma, who would drink 50 cups of it before a trip to his large harem. Even celery gets a sexy reputation in the fictional realm – a theory floats that in Homer’s Odyssey, the nymph Calypso captured Odysseus and powered their amorous romp for five years (presumably a little shakily) on a celery diet.

Just looking the right shape goes a long way too. During the Middle Ages, the Law of Similarities, or the Doctrine of Signatures, claimed that natural food and plants resembling body parts can be used to treat ailments of those body parts. This is why anything that vaguely resembles a penis or a vagina is believed to lift sexual vigour, including asparagus, eggplants, pomegranates, oysters, and avocados (or ‘testicle tree’, as the Aztecs called it).

Similar beliefs are found in the East. Ancient Chinese medicine prescribed eating ginseng to boost libido. The more a ginseng root resembles a penis, the greater its potency – putting a whole new spin on the current zeitgeist of ‘fake it till you make it’.

Another factor is simply the feeling that a food can elicit. Fugu, the Japanese blowfish, is a cherished aphrodisiac, and priced like it. With enough toxin in a single fish to kill 30 people, a fugu dish requires skilled preparation, and eating it has been likened to a deadly game of Russian roulette. Still, it’s also the danger that titillates – the rush of adrenaline can often be confused with sexual chemistry, as some studies (and many James Bond movies) showed.

Many virility-linked foods are, in fact, everyday ingredients, like ginger, garlic and rice. It is so ubiquitous that we probably deserve medals for managing to keep our clothes on after every meal. Or, is aphrodisiac food pretty much hot air?

Occasionally, we do hear about studies that exclaim eating something makes one better in bed (while wondering what the experiment looked like). But generally, mainstream scientific research finds a limp link between food and sexual performance. One reason is that too little is known about our internal plumbing, especially what turns us on, or off.

“Really, science has not figured out what determines sexual motivation and sexual attraction. If we knew the answer to that, we’d probably be richer than Pfizer after they invented Viagra,” Dolores Lamb, director of the Center for Reproductive Medicine at Baylor College of Medicine, told NPR.

ED refers to the inability to maintain an erection that is firm enough for sexual intercourse. According to a study published in the Asian Journal of Andrology in 2011, the reported prevalence rate for ED in Asia ranges greatly – from 2% to

88%. Many more cases of the affliction, a taboo topic in this region, likely went unreported. “In general, there are no evidence-based medicine studies that compellingly show foods have aphrodisiac properties,” Lamb was quoted as saying in another interview.

Take the Valentine’s Day default gift for the unimaginative: chocolate. Feeding each other bonbons may boost a couple’s moods (thanks to the dessert’s feel-good chemical compounds), wrap them in a romantic stupor and make their dieticians a little nervous, but that’s probably about it.

Women who eat chocolates daily were found to have no significant increase in sexual arousal or desire compared to women who do not, reports a study published in the Journal of Sexual Medicine (thus carrying on the noble tradition of science: telling people stuff they don’t want to hear).

Another example is the oyster, a rich source of zinc which has been touted as the critical mineral for sperm and testosterone production. But few evidence has directly linked zinc to sexual health.

Alcohol’s aphrodisiac qualities, aided by its tendency to loosen inhibitions (and underwear), are also under doubt – boozing has been shown to negatively affect sex drives.

But don’t chuck the Godiva and the Cheval Blanc just yet. They may still help in getting lovebirds in the mood, thanks to the power of placebo. The placebo effect is clinically proven to be effective in curing ailments not with the treatment, but with the patient’s belief in the treatment. It has even worked when patients knew they were taking a placebo. In other words, if one believes that eating a particular food can help with action under the sheets, it may very well become true. This, doctors posit, is why some people swear by the efficacy of aphrodisiac food.

The harm, however, is when the food is unsafe for consumption. While everyday sexy snacks like milk and celery are healthy, traditional herbs like eurycoma longifolia (tongkat ali) are contentious among the medical community.

“I can vouch that all these things – urut batin, tongkat ali, silicon injection – not only do not work but they are also hazardous,” urologist Professor Datuk Dr Zulkifli Md Zainuddin said at the recent Pfizer Global Sexual Habits Survey Presentation. He added that he had carried out surgeries on many damaged male external genitalia due to the wrong remedies.

Some research did find that the tongkat ali herb improved sexual performance, but consuming it is still a gamble – some supplements from Malaysia were found to contain mercury or lead. Not to mention, human’s rampant appetite for virility boost has endangered entire animal species. Rhinoceroses are hunted for their horns, tigers are poached for their penises, and sea turtle eggs are swallowed, all for their unsubstantiated power in restoring vigour in the pants.

Looking through the rearview mirror of modernity, it is easy for us to make fun of the ill-advised, even nonsensical, dependence that ancient humans placed on aphrodisiac food. But fertility was no laughing matter then. Being childless could spell disaster in the earlier eras, especially for women. There was a widespread belief that a woman with trouble conceiving exerted a bad influence on crops. In ancient India, women who could not get pregnant were seen as possessed by the ferocious goddess Nirrti, and could be cast out of the family. Infertility was also grounds for divorce in ancient Rome, or earn one a place on the burning stake during the witch-hunting craze in Europe. No wonder couples were desperate to put a bun in the oven.

As the American anthropologist Robert Murphy once said, “Culture is a set of mechanisms for survival, but it provides us also with a definition of reality.” Who are we to judge the beliefs of yore? Today, many men still attach self-esteem to performances in bed, and married couples are still pressured to pop a kid out.

Perhaps this Valentine’s Day is as good a time as any to take a break from the grind. Aphrodisiac food may or may not work, but most of them make a good meal anyway – so just enjoy the flavours and each other’s company, and let the evening take you where it will. Whatever comes, comes.

Related: The Long and Varied History of The Michelin Guide

Are Restaurants Able to Sustain And Adapt Post Covid-19?
By ​Jyy Wei This Californian Burger Is Eaten Dipped With Cheese
By Marlina Azmi