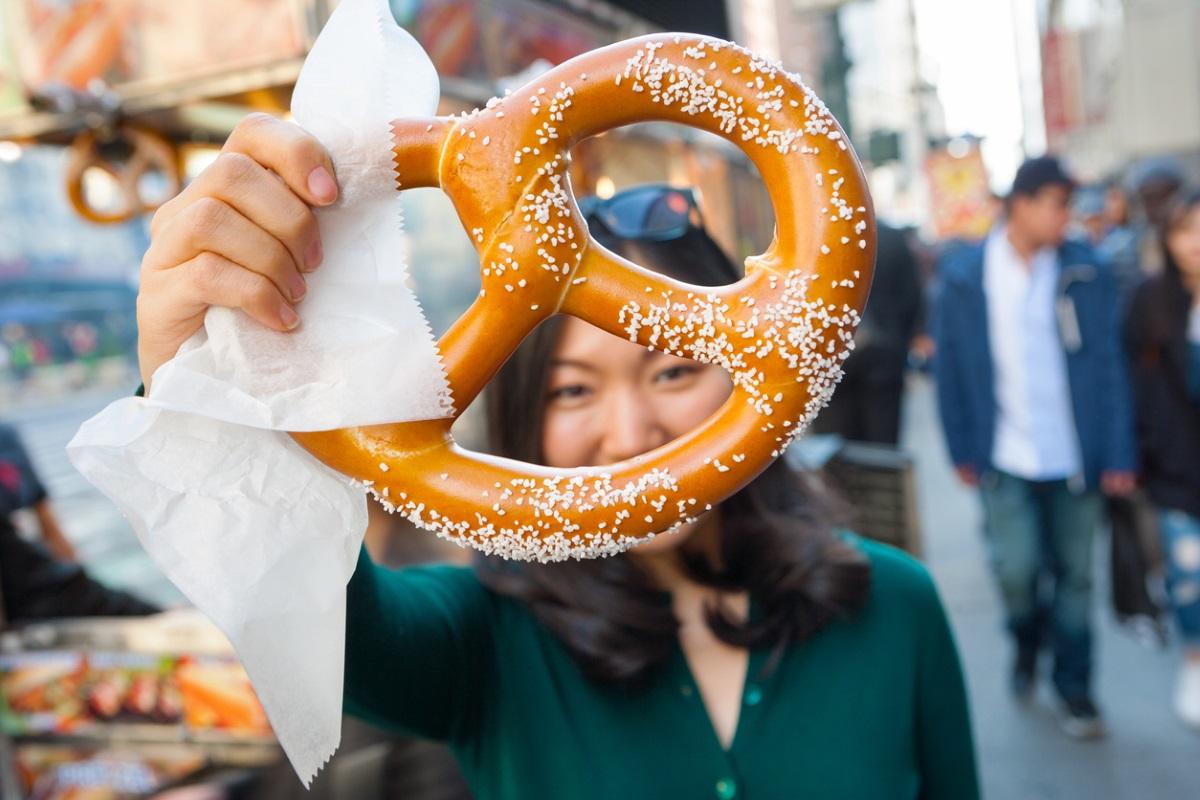 Indulge in some of New York's iconic foods. Photo: iStock

New York, like America, is the story of immigrants arriving in the city from around the world to seek freedom and opportunities, taking a chance at the American Dream. They first came from Ireland and Germany in the mid-19th century and later from Italy and Eastern Europe. More recently, immigrants from Latin America, Asia and the Caribbean have flooded the city, making New York City just as vibrant and vital as it was in 1918 or 1818.

With every new wave of immigration, a new food scene inevitably follows. Now neighbourhoods such as Coney Island, Corona, Flushing, Jackson Heights and Sunset Park are being revitalised the same way with new foods from Ethiopia to Malaysia.

They may be of humble origins but many of these foods have become everyday staples for NYC residents to order in a restaurant, a takeout, or grab from a street cart, corner deli, or lunch counter. Take a bite out of these New York favourites.

BAGELS & LOX (Lower East Side)
Bagels most likely arrived in the Lower East Side along with a wave of Jewish immigrants in the late 19th century. However, they only became the phenomenon we know today when in 1927 Murray Lender, son of a Polish baker, hit upon a method for mass distribution of bagels when he froze and shipped them to supermarkets around the country.

There are now delicious bagels all around the city, but some of the best are still in the Lower East Side at Kossar’s Bialys (367 Grand Street) and Russ & Daughters Cafe (127 Orchard St). While not known for bagels, Katz’s Delicatessen (205 E Houston St) has been paying tribute to all other Jewish classics since 1888. Their pastrami sandwich is the one to queue up for.

DUMPLINGS (Chinatown)
Every food-loving New Yorker has an intimate relationship with their local Chinese food joint. It’s the spot where you began an unlikely romance over a plate of greasy General Tso’s chicken. It’s the hole-in-the wall with the fortune cookie prophecies that never come true. There are hundreds of Chinese restaurants in New York, but the most authentic are still found in Chinatown.

While the oldest dim sum restaurant in the city, Nom Wah Tea Parlor (13 Doyers St) has been slinging dumplings since Woodrow Wilson was president, save room for Joe’s Shanghai’s (9 Pell St) popular crab-filled soup dumplings. More recently, hybrid Chinese fare such as kung pao pastrami has emerged from the innovative Mission Chinese Food (171 E Broadway) which encapsulates everything that is good about New York food, taking flavours brought by Chinese immigrants and transforming them into something uniquely American.

HALAL CHICKEN AND RICE (Midtown)
The Halal cart has become one of New York City’s newest food phenomena. There are several variations on how halal carts have grown into some of the most ubiquitous food carts in the city selling platters of chicken and gyro over rice to hundreds of people a day. The famous Halal Guys (W 53rd St 6th Ave) say they used to sell hot dogs before a huge demand from Muslim cab drivers looking for a halal meal made them change course. Others claim that halal carts took inspiration from Greek gyro vendors, and that the famous white sauce now drizzled over chicken and rice is inspired by tzatziki. Most agree, however, that Egyptian immigrants started this food marvel in the 1980s and 1990s.

There is also no doubt that the food these carts sell has become something more specific and entirely native to New York City. While Rafiqi’s Food Cart (41St and Park Ave) and the Halal Guys have franchised nationwide, others like Trini Paki Boys Cart (43rd St & 6th Ave) and Sammy’s Halal (70 W 39th St) remain in the “only in New York” category. Well, at least for now.

DINERS (Greenwich Village)
New York diners are an iconic symbol of the American dining experience and for the last half century, they have been part of the Greek immigration story as well. About 350,000 Greeks came over to America in the early 20th century, and many took over greasy spoons and cafes in New York city, turning them to Greek diners which kept American classics on the menu, but added specialities from their homeland.

Today, many Greek owners have transformed the classic diner to upscale restaurants serving more traditional fare. However the highly-rated Waverly Diner (385 6th Ave) and the nearby Washington Square Diner (150 West 4th Street) have kept to their humble roots. New York residents love that they can saunter into these 24hour establishments to order cheese burgers, chicken skewers with pita bread, and milkshakes at 3am.

THE SQUARE PIZZA SLICE (Little Italy & Nolita)
At almost the same time as Chinese immigration to the city, came a massive influx of Italians in the late 19th century. Few will dispute that pizza as we know it started in Naples. Even fewer will dispute that years of evolution have rendered New York’s square pizza almost unrecognisable. Although not as iconic as the floppy triangle slice, the Sicilian (square, fluffy and domed) or the grandma slice (square, thin and crispy) have become just as important to the New York pizza scene. Try the renowned Prince Street Pizza (27 Prince St) for a perfect square of both variations or try the ones at Famous Ben’s Pizza (177 Spring St). Meanwhile, for those who still like their pizzas round, Rubirosa (235 Mulberry St) is famous for their vodka pizza.

RAMEN (East Village)
As the Japanese economy took off in the 1980s, many young expats came over to New York as students and moved to East Village, enticed by its picturesque tenements and cheap rent. The food scene inevitably followed, with sushi bars and izakayas popping up to feed the new young residents. Soon the village was spearheading efforts to satiate the city’s infatuation with ramen, and it is still full of go-to spots.

KOREAN FRIED CHICKEN (Koreatown)
KFC has gone mainstream in the New York food world – not Colonel Sanders’ Kentucky Fried Chicken but Korean Fried Chicken. Koreatown may be only a few blocks long but it is a foodie paradise chock-full of Korean restaurants, cafés and bars, thanks to the mass Korean immigration to America which began in the 1950s.

COFFEE (Nolita)
Five years ago, you would be hardpressed to find flat whites in New York but today, it’s almost impossible to walk five blocks in Manhattan without bumping into the ubiquitous ‘Aussie café’, a new genre of coffee shop that emphasises carefully crafted espresso beverages such as the flat white, sunny service (“G’day, mate!”), and a menu of fresh and light fare such as the quinoa bowl and smashed avocado toast.

As more young Australians migrate to New York City in search of career opportunities courtesy of the E-3 visa, they find themselves living or socialising in the roughly six-by six block Nolita territory where authentic coffee shops such as Ruby’s Cafe (219 Mulberry St), Bluestone Lane (35 Spring St) and Two Hands Cafe (164 Mott Street) are found. Which is convenient as they now live in a city that never sleeps.

THAI NOODLES (Hell’s Kitchen)
Hell’s Kitchen might not be the first place people think of when they want Thai food but recently a plethora of Thai eateries have been flooding the area mostly in the form of lively, pint-sized digs. While there are only about 8,000 Thai-Americans living in New York City, there are hundreds of Thai restaurants across neighbourhoods which is a testament to the popularity of this cuisine.

Related: 22 Classic Must-Try Things in New York City
More New York: The Most Fun Your Kids Will Ever Have in New York 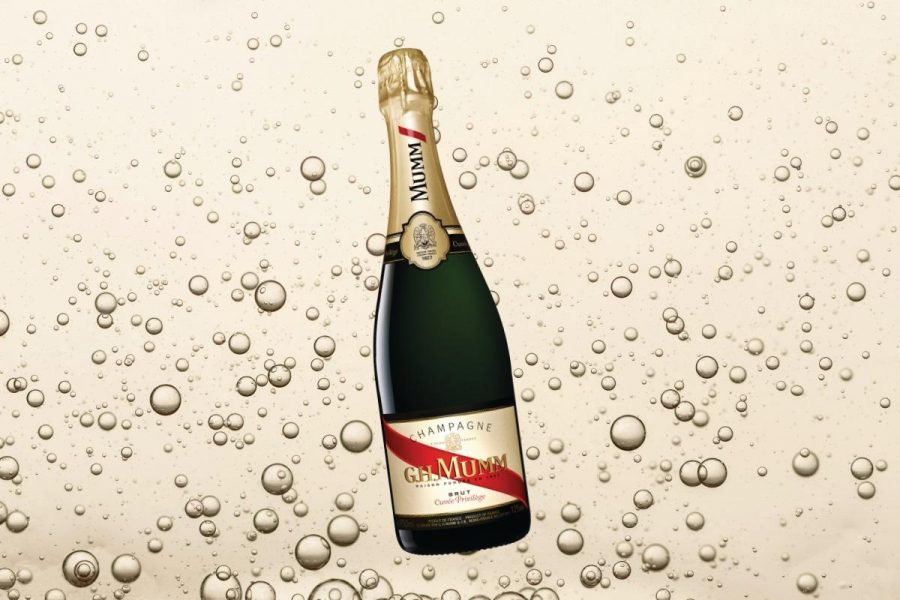 A Quick Bite with the new Executive Chef of The St. Regis Kuala Lumpur
By Ezza Zainal