North Korea Thinks Talks with US Lack “Political Will” 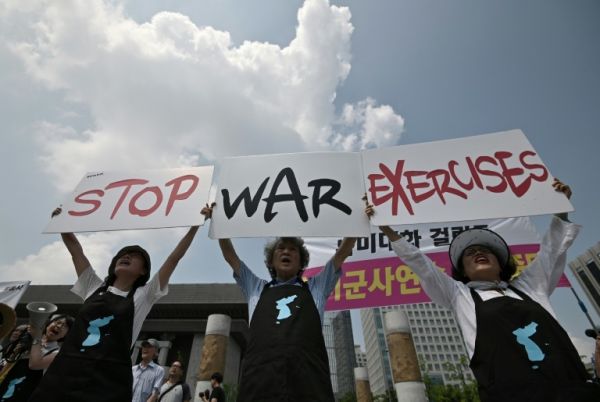 War exercises aren't coming to an end yet in North Korea despite talks with the US. Photo: AFP

There were no further details but the reported firing came after three earlier weapons tests over eight days. “Despite our repeated warnings, the US and South Korean authorities have finally started the joint military exercise targeting the DPRK,” the foreign ministry spokesman for the nuclear-armed North said, according to KCNA.

“This is an undisguised denial and a flagrant violation of June 12 DPRK-US Joint Statement, Panmunjom Declaration and September Pyongyang Joint Declaration, all of which are agreements to establish new DPRK-US relations and build a lasting and stable peace regime on the Korean peninsula,” the spokesman said, referring to the annual joint military exercises that began Monday.

After a year of mutual threats and mounting tension, US President Donald Trump and the North’s Kim Jong Un held a historic summit in Singapore last year, where both leaders signed a vague pledge to work towards “denuclearisation of the Korean peninsula”. A second summit in Hanoi in February broke up amid disagreements over sanctions relief and concessions from the North.

Trump and Kim agreed to resume nuclear talks during an impromptu June meeting in the Demilitarized Zone that divides the peninsula, but that working-level dialogue has yet to begin.

Pyongyang warned last week that further nuclear talks could be derailed if Seoul and Washington pushed ahead with the manoeuvres. The North’s spokesman on Monday also accused the US, apart from holding the exercises, of “deploying a large amount of latest offensive military equipment” in the South.

“All the above facts prove that the US and South Korean authorities do not have political will at all to implement the joint statements whereby they committed to improve the DPRK-US relations and the inter-Korean relations, and that they remain unchanged in their position to continue to face us as an enemy,” the spokesman said. He added that Pyongyang remains “unchanged in our stand to resolve the issues through dialogue,” but warned that it was becoming more difficult.

“The prevailing situation is dramatically dampening down our desire for implementing the DPRK-US agreements and the inter-Korean agreements, which also affects the prospect of future dialogue,” he said. Pyongyang may have to seek “a new road,” but if the US and South Korea continue to disregard the North’s warnings, “we will make them pay a heavy price,” the North’s spokesman said. Pierre Cardin: 6 Designs That Proved He Was Ahead Of His Time
By Amylia Hilda
Myanmar’s Rakhine State Experiences Unprecedented Internet Shutdown
By Lainey Loh