Travelling at 252 kph, the hurricane is now headed straight for Hong Kong and Macau.
Thursday 13 September 2018 A damaged taxi sits under a fallen tree in the aftermath of Typhoon Mangkhut in Hong Kong. Photo: Mark Ralston/AFP

Typhoon Mangkhut which hit the Philippines and Hong Kong has left a trail of irreparable damage and is currently continuing its path of destruction in China after hitting the mainland on Sunday.

Philippines has been hit the hardest, where at least 54 people were killed as the storm passed through Northern Luzon.

In addition, 42 people (mainly miners) from the municipality of Itogon are still missing, believed to be buried under thick mud. Search and rescue operations are underway.

It was reported that President Rodrigo Duterte confirmed that more than 250,000 people were affected by the disaster and more than half of that number was seeking refuge in a flood shelter.

When Mangkhut made landfall in the Philippines Saturday morning at 1:40 a.m. local time, the storm was packing winds of up to 270 kph.

After leaving the Philippines in tatters it headed for Hong Kong, where it destroyed some of its most treasured architecture and downed multiple trees.

Despite the extensive property damage however, the storm which thankfully did not cause any casualties.

Hong Kong seems to be recovering best as businesses have resumed.

As for China, Mangkhut has forced over 3 million people to evacuate.

The aftermath left behind damaged skyscrapers and caused serious flooding in low lying areas as waves of more than three metres lashed the coast.

Super Typhoon Mangkhut slammed into the Philippines in the early hours of Saturday, bringing with it ferocious gale-force winds and pounding rains, as aid agencies warn millions are at risk from rising flood waters and landslides.

Mangkhut, the strongest storm anywhere on the planet in 2018, made landfall in Cagayan province, on the northern tip of Luzon, about 2:30 a.m. local time, with gusts as high as 325 kilometres per hour.

After the centre of the storm passed the Philippines, Mangkhut’s winds slowed enough for the typhoon to lose its ‘super’ status, but it remains a very powerful storm system with maximum sustained winds of 215 kph. It’s now pounding the Philippines with heavy rain, and heading west into the South China Sea toward Hong Kong and southern China.

In Cagayan’s capital city of Tuguegarao, strong winds lashed buildings, pulling off entire roofs and throwing large chunks of debris into the air.

So far, Mangkhut has claimed two lives in the Cordillera region where there have been 51 landslides so far.

The Philippines Red Cross said waters were rising in parts of Tuguegarao. Video on social media showed people in the city wading through ankle deep water, amid torrential rains.

Storm chaser James Reynolds, who was in a hotel in Santa Ana, in Cagayan, when the storm hit, described how the winds ripped through the hotel’s interior, leaving it uninhabitable. “There was plywood and shards of glass flying through the corridors,” Reynolds told CNN. “It must be hell for the people out there living in huts and fragile homes, must be terrifying.”

Many of those in Northern Luzon live in isolated farming communities. There are fears the typhoon could lead to flash flooding in more rural areas, triggering landslides.

An estimated 5.2 million people in the Philippines were within 125 kilometres of the projected path of the Super Typhoon, according to the National Disaster Risk Reduction and Management Council.

The scale of the typhoon could be felt in the Philippines capital Manila, more than 340km from the eye of the storm, where heavy overnight rains have led to widespread flooding in urban areas.

In advance of the storm’s arrival Friday, parts of Luzon were placed under Tropical Cyclone Warning Signal No. 4 by the Philippine Atmospheric, Geophysical and Astronomical Services Administration, meaning those areas could expect winds of up to 185 kph that could uproot trees, destroy crops, take out electricity and damage buildings.

The agency warned of storm surges up to 19 feet along the Cagayan and Isabela province coastlines. Most of the rest of the island is under Signal No. 3, meaning it can expect winds of up to 100 kph and significant risk to trees, crops and structures. Parts of the island are also at risk of flooding due to heavy rains.

Mangkhut is on track to be as strong as Super Typhoon Haiyan, which left more than 6,000 people dead in the Philippines in 2013, though that storm hit a more populated part of the country.

Northern Luzon was also devastated in 2016 by Super Typhoon Haima, with 14,000 houses destroyed and 50,000 homes damaged, according to CNN Philippines. “We are bracing for the worst here,” said Lanelyn Carrillo, a spokeswoman for World Vision, a humanitarian organisation. “There is a sense of fear that we might be facing a storm as bad as Haiyan or Haima.”

As of Friday morning, 2,298 families had been preemptively evacuated from their homes in Ilocos, Cagayan Valley and Cordillera administrative regions in northern Luzon. Governor Bojie Dy reports more than 5,000 people have been evacuated from coastal areas in Isabela province.

The Philippines Red Cross said it had activated 30,000 volunteers across Luzon to prepare for the impact of the storm and dispatched a ‘humanitarian caravan’ consisting of rescue and relief vehicles to the parts of the island expected to be among the worst affected.

“We’re worried for the 10 million people in the Philippines living in the path of this destructive storm, including those who have been displaced several times due to the monsoon rains last July and August,” Richard Gordon, chairman of the Philippines Red Cross, said in a statement. “We are preparing our emergency assets and relief items. Our staff and volunteers are on high alert for possible deployment.”

Officials told CNN Philippines the cost to rice and corn crops could be upward of US$116 million, with more than 1,220,000 hectares of fields expected to be damaged by the storm.

Once it passes over the Philippines, Mangkhut will continue west through the Luzon Strait into the South China Sea, making expected landfall early Sunday in southern China.

The Hong Kong Observatory said it is still likely to be at super-typhoon level as it nears that city and Macau, bringing with it winds of up to 195 kph per hour.

Mangkhut could be one of the strongest storms to have an impact on Hong Kong in more than six decades.

The typhoon will make its closest pass to Hong Kong during the day on Sunday, likely during the afternoon. Officials in Hong Kong held emergency meetings Friday, and residents in low-lying areas and outlying islands have been urged to move to temporary shelters.

Macau’s Meteorological and Geophysical Bureau warned that Manghkut would “pose a serious threat”. Last year, 10 people died in Macau as a result of Typhoon Hato, the strongest storm to hit the city in more than five decades. It caused widespread flooding and damage to property. Is Malaysia On the Road to Recovery with MCO3?
By Frank Nelwan
Malaysia Promises to Continue with MH370 Search
By Lira Jamaluddin 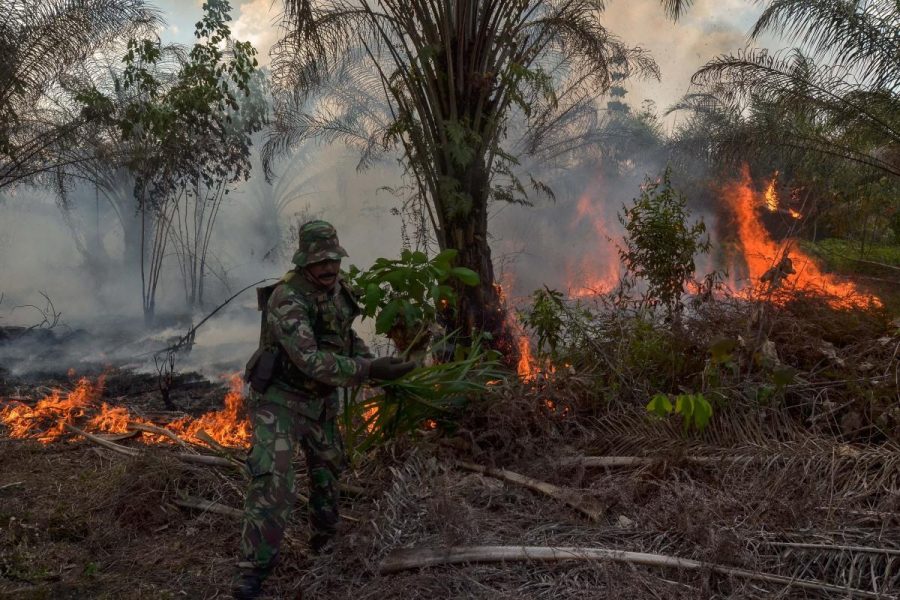 There Will Be No New Palm Oil Plantations in Indonesia
By