The picturesque spots that are also a breeding ground for selfie-related deaths.
Wednesday 18 September 2019 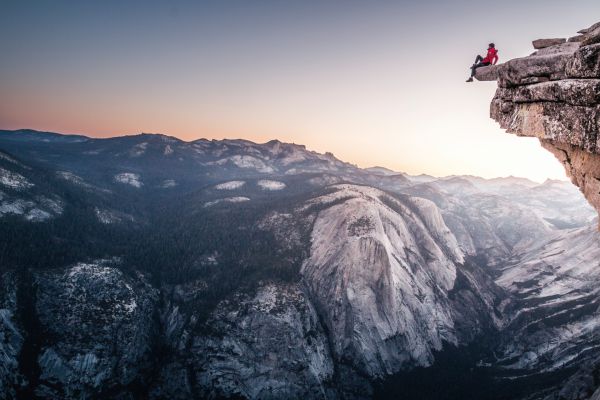 Risking your life or taking a risk at having one? Photo: iStock

American travel influencers Kelly Castille and Kody Workman, also collectively known as Positravelty, have come under fire once again for a dramatic, cold sweat-inducing Instagram post. Taken at Laguna Humantay, a lake in the Peruvian Andes, the picture shows Workman holding to Castille, who is dangling over on a cliff hundreds of feet above the lake.

“The world is waiting for you! Behind the masses of those that wish to watch you lead a quiet and sedentary life is an open, unlined canvas. We urge you to take a chance, to push past barriers of negativity and oppression of self-fulfilment and paint the picture of who YOU want to be. Never let yourself be beat down for living your life by those too afraid to live their own,” the couple wrote in their caption. “There is a difference between risking your life and taking a risk at having one. We know which side we would rather be on, do you?”

The world is waiting for you! Behind the masses of those that wish to watch you lead a quiet and sedentary life is an open, unlined canvas. We urge you to take a chance, to push past barriers of negativity and oppression of self fulfillment and paint the picture of who YOU want to be. Never let yourself be beat down for living your life by those too afraid to live their own. There is a difference between risking your life and taking a risk at having one. We know which side we would rather be on, do you?

Their Instagram post was met with some critical commenters. “Be inspirational by all means, but stop ratcheting up this pseudo-dangerous vibe before you encourage someone to kill themselves,” wrote one commenter. “I think your photos and travels look marvellous but goodness me, these photos put OTHER people at risk and I’m not taking those who want to copy you but the first responders who would have to put their lives on the line should your photo go horribly wrong. That’s the real selfishness of all this. It’s not your safety I’m concerned about in the slightest but the safety of others,” wrote another.

This is not the first time the couple has courted danger and criticism. In April, they were called out for a picture taken in Bali, Indonesia in which Workman was holding Castille over the side of a high-walled pool.

Workman and Castille told CNN that both the Laguna Humantay and the Bali shot were composed with optics and “a trick of perspective”, adding that they weren’t scared “in the slightest”. “We trust each other, and we would never do something that would put our lives at risk,” CNN quoted them as saying. “Perspective shots like these simply avoid certain surrounding elements. As for this specific shot, it is the framing that creates the dramatic perspective.”

In speaking about the issue of encouraging their followers to put themselves in danger, they said, “We will never live any moment of our lives concerned that someone, somewhere, ‘might’ one day copy us,” adding, “We believe that everyone is capable of making their own decisions and determining what they should and should not do.”

But perhaps now is a good time to remind ourselves that although a picture may be worth a thousand likes, nothing is worth people dying for the sake of the gram. Here are some of the world’s deadliest selfie spots:

If you get caught taking a selfie during the running of the event of the bull at the San Fermin Festival in Spain, you can get fined up to €4,000. In 2015, A 32-year-old Spanish man escaped this fine and later died from his wounds after he was gored while snapping a selfie with the charging bulls in an event in Villaseca de la Sagra.

The towering granite structure stands at 2,286 metres high and offers stunning views of Yosemite Falls and El Capitan, making it a popular spot for tourists and even weddings and proposals. Park officials report at least 10 people have died falling from the point in 2018.

One of the most sacred mountains in the Shaanxi province includes a notorious attraction among daredevil tourists – the Hua Shan plank walk, a narrow pathway on the cliffside made out of a series of flimsy wooden planks about 2,160 metres high above the ground. Authorities have reported over 100 accidents at the spot.

Located on the westernmost part of mainland Portugal, the rocky formation offers stunning views of Portugal’s sandy beaches, but take one wrong step and you might fall into oblivion. That was the fate of a Polish couple in 2014 and another couple who were on holiday in 2018; their bodies were found down the 30-metre drop on the Praia dos Pescadores beach.

It’s not all natural wonders that cause accidents; the popular Taj Mahal monument has plenty of slippery surfaces which may cause serious accidents. In 2015, a Japanese man slipped down the monumental stairs while trying to take a selfie at the Royal Gate and subsequently died from his injuries.

This article is an excerpt from UNRESERVED’s July/August 2019 issue from the article A MATTER OF LIKES AND DEATH.

Related: The Selfie Epidemic: A Matter of Likes and Death

Luck of the Irish: How Ireland Played a Part in Game of Thrones
By Jennifer Choo