This Renaissance Painting Hanging In a Kitchen Sold For €24 Million

Its owner thought it was just an old religious icon.
Thursday 31 October 2019 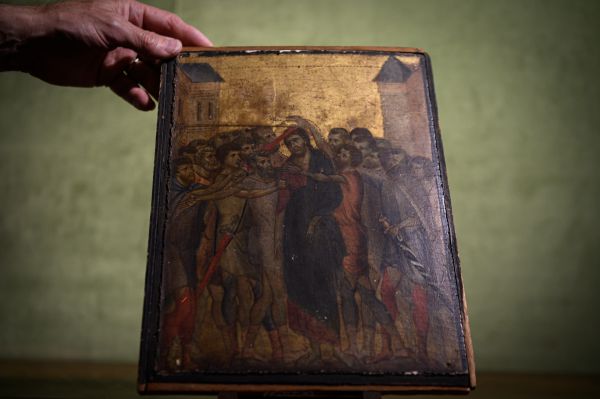 It certainly pays sometimes to take stock of any old paintings of furniture you might have…you never know whether it might have been painted by a famous artist and worth millions. In this case, an elderly French woman is now a multimillionaire just from the sale of a single painting in her house.

Christ Mocked, by the 13th-century artist Cimabue also known as Cenni di Pepo, was valued at €4 million to €6 million (US$4.4 to US$6.7 million) for France’s biggest art sale of the year.

The French painting’s elderly owner in Compiegne, northeast of Paris, thought it was just an old religious icon when she sought an appraisal from auctioneers at Acteon, the house organising the sale in nearby Senlis. It was hanging between her kitchen and her sitting room.

Art experts at Turquin in Paris used infrared reflectology to confirm that the tiny unsigned work, just 26 by 20 centimetres (10 by 8 inches), is part of a larger diptych from 1280, when Cimabue painted eight scenes of the passion and crucifixion of Christ.

Only two other elements of the diptych are known to exist: The Flagellation of Christ at the Frick in New York, and The Virgin and Child with Two Angels at the National Gallery in London.

The “Virgin” was valued at £6.5 million (US$8.3 million) when it was given to the museum in 2000 in lieu of inheritance taxes by a British aristocrat who found it while cleaning out his ancestral seat in Suffolk.

“The style, the ornamentation of the gold background, the matchings of the backs of the panels and the overall conditions of the three confirms that they were part of the left side of the same diptych,” Acteon said.

Historians say only about a dozen works on wood – all unsigned – are thought to have been made by Cimabue, more known for his mosaics, frescoes and altarpieces. His more natural and nuanced depictions marked a turning point for Italian painters still influenced by highly stylised Byzantine art. Art historians consider him a trailblazer for the creative Renaissance that would flourish under greats like Giotto, one of Cimabue’s pupils.

The painting has been sold at €24 million (US$26.6 million), more than four times the pre-auction estimate, according to Acteon auction house.The identity of the winning bidder has not been revealed but a foreign museum was one of the bidders.