Experience the grandeur of Jodhpur and come away charmed and enlightened.
SK Effendi
Thursday 24 May 2018 2 /7
The Mehrangarh Fort dominates the city skyline, rising majestically 400 feet above Jodhpur, on the edge of the Thar Desert. Photo: Getty Images 4 /7
The Maharaja Umaid Singh, second from the left, in Jodhpurs (1925). Photo: Wikimedia Commons India is a country of contrasts. When you land in Delhi, which is where one typically begins a grand tour of Rajasthan’s “Golden Triangle” (Delhi-Agra-Jaipur), you will be struck by the leafy avenues and elegance of well-planned Delhi, the city designed by Sir Edwin Lutyens at the turn of the 20th century. Ten thousand trees and 112km of hedges were planted and “New” Delhi, the seat and showcase of the British Empire was planned in 1911 to resemble “an Englishman dressed for the climate”. Completed in 1931, the British were clearly oblivious to the change in climate for colonisation or that the end of their Empire was nigh.

The elite and the affluent live elegantly and stylishly in areas called “enclaves” or “colonies”. Delhi people are warm, funny, self-deprecating, fiercely intelligent and acutely aware of the world outside their gates. Beyond Delhi, there are many sights that will make you avert your eyes. But this mustn’t hold you back from visiting India. Her history and architecture beckon, and to experience the magic, you will glimpse beauty and poverty co-existing.

I knew little of the Blue City of Jodhpur, and our visit was an afterthought that only materialised recently, taking fourth place after Agra, Jaipur and dreamy Udaipur. While I had long been fascinated by the Pink City and Gayatri Devi the Maharani of Jaipur, famed for her beauty (she was Vogue’s “ten most beautiful women in the world” in the 60s), the Maharaja of Jodhpur is most famed for, well, a pair of pants.

When Sir Pratap Singh (then Regent) attended Queen Victoria’s Golden Jubilee celebrations in 1887, he became a fashion sensation wearing the traditional Churidar, full-length trousers which are flared at the hip and tight at the calf. Designed for his equestrian and warrior Kshatriya clan, the British adopted the practical riding breeches calling them simply, “Jodhpurs”. When our guide Mr Singh met us at our hotel in a close-collared Jodhpuri coat and an elegant pair of Jodhpurs, my enthusiastic appreciation was met with “these are our traditional trousers ma’am”.

Mr Singh asks my travel companion, “Where are you from, sir?” When he replies “Malaysia”, he asks again, “But where was your family originally from?” Again, the answer was not to his satisfaction. “But you look Rajasthani, and specifically like a Rajput Warrior, from the shoulders and the nose”. In fact, his suspicions were not without basis. With 50% of his genetic makeup German, the mixture of the ancient Aryan and Malay chromosomes somehow resulted in a Northern Indian phenotype. Thenceforth, he became my Rajput Warrior and me, his favourite Javanese concubine.

The Mehrangarh Fort dominates the city skyline, rising majestically 400 feet above Jodhpur, on the edge of the Thar Desert. There is something special about desert air and light. Warm dry cloudless days, colder chilly evenings, starry nights and always, the chance of a beautiful sunset.

As the Fort commands the city of Jodhpur, the luxury boutique hotel the RAAS Jodhpur, gives the Fort the attention it deserves. Located in the ancient walled city, it was built around an 18th century haveli (mansions adorned with intricate artwork owned by wealthy merchants of a bygone era), tastefully mixing modernity and heritage. Choose a Luxury Room which all come with balconies and postcard views of the Fort filling the sky in every window.

The Mehrangarh overlooks the RAAS complex and in the evening when it is illuminated, it looms over the hotel like a sentinel guarding us. Out of respect for the traditions of the walled city, neither beef nor pork are served and one is spoilt for choice as a vegetarian at the Baradari and Darikhana restaurants.

RAAS was originally the village where the haveli is located and the hotel vicinity has a small villagelike though upscale atmosphere with wonderful shopping at gorgeous boutiques. Toorji Ka Jhalra is a historic step well (the steps follow the fluctuating water levels) built in the 1740s that the locals used to draw fresh water from. Stepwell Square has undergone restoration and the Stepwell Cafe is a great place to take in the views from above. The well is not for the vertiginous among us, but it is truly a wondrous architectural sight.

The Mehrangarh Fort meaning ‘Fort of the Sun’ is a reference to the Rajput clan’s ancestor, the sun god Surya. In the late 1400s Rao Jodha began building the fort on a rocky outcrop on high elevation for defence against foreign invaders such as the Mughals, or the neighbouring hostile Rajput states of Jaipur and Bikaner. Indian forts were not just defensive; they housed the rulers’ palace, the centre for music, literature and art, and also places of worship.

A sense of friendly rivalry still exists between Jaipur and Jodhpur. At Jaipur’s Amber Fort you ascend on elephants in fancy dress in a colourful parade. To be honest, that ride had some hairy moments as we wobbled up feeling that we might teeter off the precipice of the cliff. As we contemplated our hike to the top of the Mahengarh, Mr Singh assures us, “Don’t worry. If Jaipur has elephants, we also have an E. E for elevators.” This was a much more comfortable ride to the top.

Built over 500 years, you see different architectural styles juxtaposed in close proximity – from Rajput to Mughal and even kitschy stained glass windows. Once the British fully controlled India when the Mughal empire lost a final battle in 1858, the Maharajas had no need for fortified citadels. They moved into new, westernised palaces with modern amenities.

Flanking the city on the east side of Jodhpur is Umaid Bhawan Palace. On our way to Chittar Hill, Mr Singh recounts how Jodhpur suffered a devastating three-year drought that brought famine in the 1920s. Conditions were so desperate that as a boy, his grandfather remembers boiling tree barks for food. “They have known such hunger,” Mr Singh shakes his head sadly. According to local lore, Maharaja Umaid Singh offered the Jodhpuris money to buy food and prevent a mass exodus. They refused. “Give us work so we can earn the food.” And so began work on the Umaid Bhawan Palace as a work-for-food programme. A contemporary of Lutyens, HV Lanchester designed the Art Deco palace using local materials and 3,000 local builders, artisans and craftsmen. The exquisitely built palace is testament to the centuries-old tradition of craftsmanship and artisanal skills of the Jodhpuris.

Today the palace is divided into three areas – a luxury hotel, a small family museum and the residence of the current Maharaja. Previously managed by the ITC and Aman group, it has been run as the Taj Umaid Bhawan Palace Hotel since 2005 and was voted the “World’s Best Hotel” by TripAdvisor in 2016. The hotel is so exclusive that it is only open to hotel guests, unless a visit is arranged with prior permission. It is after all the Maharaja’s residence, so don’t just pitch up expecting entry. We were fortunate enough to secure reservations through our tour company, Designer Holidays. We were treated to a rousing welcome with trumpets, a mini guard of honour, a lovely lunch at Risala and a heritage walk through the hotel. It is in these small details that you realise the importance of travelling with a reputable and experienced tour operator.

Traditionally, the highest Brahmin caste lived outside the Mehrangarh Fort. They were entitled to paint their houses in the holy colour of blue, in an area known as Brahmpuri. That particular shade of blue is achieved by mixing the indigo dye with white limewash. Nowadays it is just a trend to cool the houses and ward off mosquitos.

The streets of Brahmpuri are exceedingly narrow and inaccessible to cars. The RAAS provides an electric tuk-tuk and driver (for a small fee) to take you from the hotel to the edge of Brahmpuri, which even a tuk-tuk can’t negotiate. Blue buildings have not been demolished for wider roads and “development” has been unable to reach it, preserving Brahmpuri in stasis. Here we were able to explore and stroll calmly, untroubled by crowds of people or tourists. We were not accosted by any locals or beggars, except for two smiley little girls who sweetly sang “hello hello hello!” They trailed us for one minute, then gave up.

While taking pictures of the shabby yet charming blue buildings, a lady stepped onto the street, greeted us warmly and invited us into her newly renovated haveli, the Rani Mahal. “Please come in, you will get a lovely view of the city on our rooftop.” Feeling bad for taking advantage of her view, we ordered coffee. Laughingly she said, “Please, you don’t have to order anything, just enjoy.” We insisted and got the million-dollar view for the price of a coffee.

Yes it’s true, to get shots of the elegantly crumbling architecture painted in that distinctive lime-washed indigo, we had to sidestep dog poo and strewn rubbish underfoot, (flip flops a bad idea here!), while my Rajput Warrior narrowly escaped a pot of tea leaves and water being dumped on his head from a window (this is how to clean teapots, obviously). We felt acutely aware that poverty and beauty are not mutually exclusive. Restoration and rejuvenation need not only be the preserve of the hip and trendy. Here was a community preserving the beauty of their buildings with whatever means they had and proud to share their history with you.

Yes, India is a country of contrasts. I have been dazzled by palaces and forts and treated like a Maharani at the most amazing Indian hotels in Rajasthan. You see grandeur and also shabbiness, you see scenes that make you look away. But coming to Jodhpur taught me that beauty comes in many forms. Not only in gleaming white marble but also in crumbling blue facades many centuries old. We experienced an intimacy and charm that we had not in other Rajasthani cities. I met people whose pride in their city, warmth and friendliness I shall not forget. And that for me, is the real beauty of Jodhpur.

Related: The Pre-Spa Treatment You Never Knew You Needed 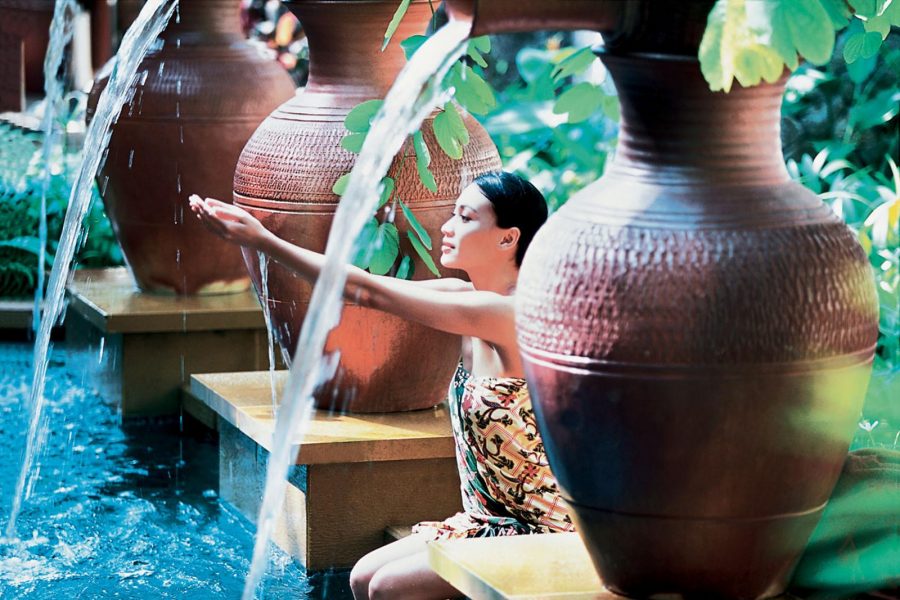 8 Iconic Malaysian Historical Landmarks You Must Visit
By Mikha Chan