What Was the Real Cost of India's Tallest Statue?

The Statue of Unity towers over the people of Gujarat, but did they suffer for its erection?
D. Kanyakumari
Thursday 1 November 2018 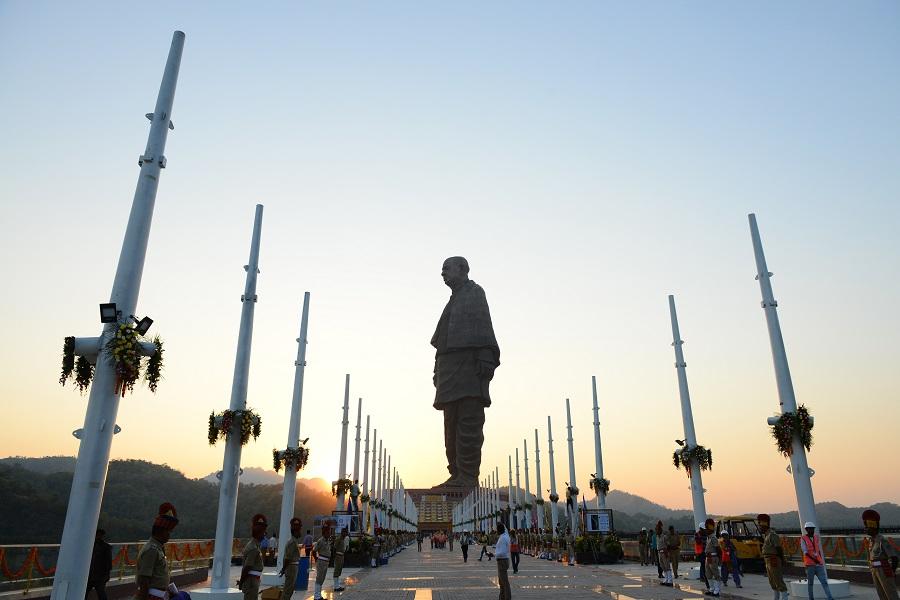 The Indian government is hoping to boost tourism numbers and the economy. Photo: Sam Panthaky/ AFP

The newly erected statue of Sardar Valabhi casts an imposing figure across Gujarat’s skyline. Unveiled to the public on 1 November 2018, it’s made up of 1,850 metric tonnes of bronze and cost a whopping US$420 million.

Considering the resources and manpower a structure of that magnitude would have required, there are very real questions about whether those resources would have been better put towards building homes for India’s 78 million homeless population. Never mind that over 200 million people in India are starving – its government, run by Prime Minister Narendra Modi, thought that erecting a 597 foot high bronze statue was somehow the better decision.

According to the India State Hunger Index (ISHI), the population of starving people in India is increasing by the year, with most states categorised as ‘serious’ and ‘extremely alarming’, especially in Northern India. In states like Madhya Pradesh, the percentage of children who are malnourished can be as high as 60%, making it worse than places like Ethiopia and Sudan. Perhaps with proper regulation and aid distribution, the situation in India could be improved. However, in what seems to be a political move, there seem to be other priorities at hand.

The Argument for Tourism

44.8 million tourists flocked to Gujarat in 2017 alone, and there’s been a strong case made that the statue will improve tourist numbers and therefore stimulate the economy. Whether the profits generated from that activity will benefit the poor is another question altogether. In 2017, The World Bank Report said that one-sixth of the 60 million population in Gujarat were poor. The report also stated that despite being one of India’s fastest growing states, poverty reduction in Gujarat was slower than in other advanced states in the country.

There’s no straightforward answer as to why the situation is at it is, but considering this bleak situation, does the erection of an extravagantly expensive statue make any sense for the people of Gujarat? And considering that Mumbai is currently constructing a statue of a warrior projected to stand at 695 feet in the coming year, the glory of The Statue of Unity may not last too long.

Analysts have said that this statue of Sardar Patel, a leader who is known to have helped India’s non-violent struggle for independence, was a political endeavour and a personal project for Narendra Modi. Modi has attempted to portray himself as a peaceful leader but was silent when Hindu extremists attempted to persecute Muslims in India for eating meat.

CNN reported that Modi’s motivation was to inculcate himself into Patel’s legacy of peace. A key figure in the freedom movement, Patel became India’s first deputy prime minister upon the country’s independence in 1947. Detractors see the statue as an act of appropriation, an attempt by Modi’s ruling Bharatiya Janata Party to associate itself with a popular figure from the opposite flank of the political spectrum.

Modi first announced the building of the statue in 2010 when he was still the chief minister of Gujarat. Although the project is largely funded by the Gujarat government, Modi’s government offered financial support and he personally called on farmers across the country to donate iron for its construction. Why the Indian leadership would impose something like that on its already struggling population is a tough question to answer.

Beyond the specifics of party politics, Gujarat’s new statue, like New York’s Lady Liberty, can be viewed as an expression of collective values. Having helped negotiate the incorporation of more than 560 of colonial India’s princely states into a single union, Patel arguably represents a national political ideal.

The question that remains is – what is India’s political ideal? During India’s quest for independence, Patel preached and practiced non-violence. Now that India is past those challenges, would the next step not be to nurture its struggling population and grant them with the resources they need to overcome their very real issues of poverty and starvation to survive and flourish?

Related: Why Has the Indian Supreme Court Approved the Killing of This Tiger?