Why Environmentalists are Mocking this Thai Summit

The Southeast Asian country and its allies have been accused of “greenwashing”.
Lainey Loh
Tuesday 25 June 2019 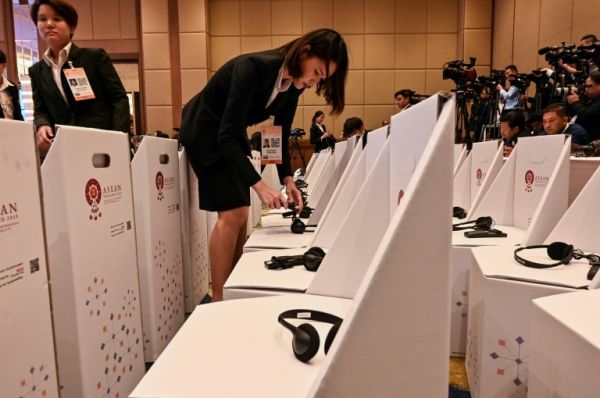 Despite offering chairs and notebooks made from recycled paper at a Bangkok summit, Thailand and its Southeast Asian allies were accused Sunday of a “greenwash” with their oceans and communities brimming with plastic refuse.

Thailand, Indonesia, the Philippines, Vietnam and China dump more than half of the eight million tonnes of plastic waste that end up in oceans every year, according to a 2017 Ocean Conservancy report. The 10-country Association of Southeast Asian Nations (ASEAN) – whose leaders are meeting this weekend in Bangkok – also receives more than a quarter of global plastic waste, mostly imported from developed economies.

But host country Thailand has been touting its “green” credentials during the two-day summit, showing off T-shirts spun from recycled plastic waste, biodegradable food containers, and 300 boxy chairs made out of recycled paper – all produced solely for the summit.

Greenpeace’s Tara Buakamsri scoffed at the “unnecessary” production of new items for the summit, in a region where plastic bags, cups and plates are liberally doled out at supermarkets and street stalls. “Using recyclable paper does not directly translate into a ‘green’ meeting,” Tara told AFP. “The hotel can provide chairs – why on earth are they producing new things?”

An organiser at the summit said the paper seats will be used for other ASEAN events later this year. The talks saw the agreement of the “Bangkok Declaration” to combat marine debris, including plastic pollution, by 2025.

Environmentalists have said the declaration lacks concrete goals and timelines for reducing ocean waste and does not touch on imported plastic waste. For years China received the bulk of scrap plastic from around the world but closed its doors to foreign refuse last year in an effort to clean up its environment. Huge quantities of waste have since been redirected to Southeast Asia, including Malaysia, Indonesia and to a lesser degree the Philippines.

As for the box-like paper chairs, made from reinforced cardboard, ASEAN leaders did not have to squeeze onto them, opting instead for the plush seats provided by the hotel host. “They need more comfortable chairs,” said Kridakorn Angkanarak, a representative of Siam Cement Group, who are sponsoring the event. Jane Goodall Shares How To Restore The Planet
By Maya Duckett, Jyy Wei
Singapore is Especially Vulnerable to One Grave Threat
By Lainey Loh