The Malaysian professor thought he could get away with it.
D. Kanyakumari
Wednesday 28 November 2018 The yoga ball was placed in the boot of the car. Photo: iStock

22 May 2015 was a morning like any other. But not for 53-year-old college professor Khaw Kim Sun. Bespectacled and wearing braces, anaesthesiologist Khaw has the appearance of someone who would not hurt a fly. His unruly jet-black hair sprinkled with grey accompanied by boyish features give him the look of a ‘cool dad’, approachable to his children.

On the morning of 22 May 2015, his life changed forever because by 3.30pm that afternoon, his wife Wong Siew Fung, 47 and 16-year-old daughter Khaw Li Ling, were found dead. But did he know that?

Malaysian-born Khaw had achieved much in life. He had two well-paying jobs, four beautiful children (three girls and a boy, aged between 12 and 20) and a beautiful home in a prime area of Hong Kong. Yet, his seemingly perfect life was not at all perfect, because despite all that he had achieved, Khaw did not have a happy marriage.

His need to have constant control, including over his family, resulted in him losing control of his wife of 23 years. Khaw and Wong were smitten with each other when they met in the late 1980s. Towards the end of their relationship, they were sleeping in separate rooms and barely spoke to one another.

Wong began writing a diary, penned in English, about five years ago. In it, we hear her side of the story as she expressed deep regret at the demise of her marriage.

Chris Lau, a journalist with the South China Morning Post who had access to Wong’s diary, said that Wong wished she could have provided a better life for her family. According to Lau, Wong had written, “I didn’t listen when my husband tried to tell me he needed me.”

Wong wrote that she had failed to care for her children or acted as a role model to give them “the best in life”. In the same entry, Wong had pledged to change for the better. Her words expressed her desire to reconcile and fix what was broken. And so with that thought in mind, Wong and her second daughter Li Ling drove off that morning in her four-door Mini Cooper, blissfully unaware of a yoga ball at the back of the car, slowly leaking deadly carbon monoxide (CO) into the air they were breathing.

DEADLY SLEEP
The human body is not designed to breathe in excessive amounts of CO. Doing so causes the body to replace the oxygen with carbon monoxide leading to dizziness, breathing difficulties and then death, within 20 minutes of inhalation.

Wong and Li Ling did not stand a chance. A passer-by, Tong Yuk Ling, found them unconscious in their locked car which had pulled over on Sai Sha Road. Initially, Tong thought they were sleeping, but by the second round of her late morning jog, she knew something was amiss. The pair had remained in the same position 45 minutes later and she noticed that the windscreen wipers were still swiping from side to side even though there was no rain.

Wong and Li Ling were rushed to the Prince of Wales Hospital in Sha Tin where coincidentally, Khaw also worked as a doctor, and both were later certified dead. The post-mortem revealed that the pair had died from carbon monoxide inhalation with 50 times the normal levels of the gas in their bloodstream.

News of their demise reached Khaw late that afternoon as he was wrapping up a three-hour student assessment session with over 250 third-year medical students. Whether he broke down and cried or maintained his composure we do not know. Like all families that go through losses, the Khaw family moved on with their lives, until another fateful morning when the doorbell rang and Wong found the police at his doorstep.

THE MISSING LINK
The police arrested Khaw that morning and he was brought to the magistrate’s court immediately and later that day to the High Court where he was charged with two counts of murder: that of his wife and daughter.

One year later on 19 September 2018, Khaw was sentenced to life imprisonment. At first glance, his murder plan was ingenious. Using his position as a college professor, he had access to carbon monoxide, a gas which in high levels can kill an adult human within minutes.

He evaded suspicion by carrying the gas home in two seemingly innocuous yoga balls. He then simply unplugged one of the two balls which he had left in his wife’s car, allowing the gas to slowly kill her and anyone else in the car while they travelled unknowingly in the vehicle.

But the question remains, what was the factor that finally took away his freedom? By this point he must have been confident that he was going to get away with murder. According to journalist Lau who covered Khaw’s trial extensively, the police had told him that the giveaway was in fact the yoga ball.

Investigators found that the trickiest part of the case was identifying the source of the carbon monoxide. “They told me that they knew rather early, that the Mini Cooper itself was not the cause of carbon monoxide. The turning point was when one of the police officers shifted his attention to a deflated yoga ball found in the boot of the car,” he said.

Lau explained that the police then conducted experiments and found that the yoga ball was indeed capable of being the weapon. “And as they dug deeper, they did find records of Khaw purchasing carbon monoxide for hundreds of thousands of dollars and to his detriment, he was spotted taking the gas out of the laboratory with two yoga balls,” added Lau.

The journalist shared that although Khaw was sentenced to life imprisonment for two counts of murder, the most vital piece of the puzzle remains missing – the footage or the testimony of a witness detailing when and how he placed the yoga ball in the car.

“Throughout the whole trial, it had always been about two competing versions by the prosecution and defence, with the jury being told they would have to rely on circumstantial evidence and their common sense to make the most educated inference, to conclude whether Khaw did murder his wife and daughter. There was no straightforward factor that proved him guilty, which was probably why it became a sensational murder trial, other than the affairs and his social status,” said Lau.

He added that even though Khaw’s domestic helper Siti Maesaroh noticed Khaw bringing the ball into the home on the eve of the murder, she testified that she did not see him place the ball in the car the next morning. She had however made a clear statement that neither Wong nor Li Ling had taken the ball with them when they got into the car.

CALCULATED MURDER
According to his sister-in-law Wong Siew Fong, Khaw was a manipulative man who believed “Whatever you do is not wrong if you don’t get caught”. By extension, it seems that the professor was determined to maintain his innocence.

In committing what Justice Judianna Barnes Wai Ling called a “calculated murder”, Khaw had premeditated an entire experiment involving carbon monoxide so that no suspicions would befall him for his use of the harmful substance. Lau explained that haematologist Kwong Yok Lam, who was attached to the University of Hong Kong, said that the experiment Khaw performed on rabbits to study carbon monoxide poisoning only looked at areas that had already been explored and added that the experiment was “not very useful” in clinical terms.

The experiment he had conducted involved drawing blood from a rabbit and mixing the samples with carbon monoxide, then reintroducing it to the animal. Prosecutor Andrew Bruce SC labelled the whole experiment a “sham” and rejected all explanations by the defence, calling it “wishful thinking” and “distractions”.

The defence counsel led by Dr Gerard McCoy SC attempted to strengthen the defence by saying that Khaw had brought the gas home to resolve a rodent problem as his 16-year-old was terrified of them.

A SMOKE SCREEN?
Every family member who testified in the case portrayed Khaw as a villain, an inhumane person who murdered his wife and child for his own evil purposes. All except one, his eldest daughter Khaw May Ling who, despite being called in as a prosecution witness, spoke in favour of her father.

Lau said that though prosecutors had shot down claims by Khaw that he brought the gas home to kill rats, May Ling contradicted the testimony of their helper and testified that there were indeed rats. “Part of Khaw’s case was that his daughter Li Ling might have committed suicide using that gas-filled yoga ball. Of course, the prosecutors disputed that, calling Li Ling’s friends to the stand to testify how full of life she was. But May Ling, while acknowledging Li Ling’s talkative character, did hint that she feared Li Ling might go to “dark places”, which most would understand as a euphemism for committing suicide,” he said. Why May Ling testified as she did remains a mystery. Did she truly believe that her father was innocent or was she merely trying to save her only parent, before her father made a mistake that tore the family apart?

BURNING LOVE
Love is a powerful impetus and it can drive men to make irrational and strange decisions. Could Khaw’s failing relationship with his wife be the reason he killed the woman he had promised to love and protect? The couple were living separate lives and Khaw was unhappy with the life he had with his wife.

According to his sister-in-law Wong Siew Fong, Khaw had accused his wife of being a “bad mother who had no ambitions for his children”. Wong’s perceived lack of commitment to be the mother that Khaw expected her to be, did not help their relationship.

A loveless marriage opens the door to infidelity. Enter Shara Lee. An assistant professor at the Polytechnic University, Lee was also Khaw’s student and had first met the family at home when he asked her to tutor his children in Mandarin sometime between 2003 and 2004. Though Khaw insisted that he only began dating Lee in 2013, his sister-in-law claimed that the affair had begun long before that.

Wong came to know of her husband’s philandering ways in 2013 but refused to grant him a divorce. Meanwhile, the lover for whom it is presumed he committed the murders for did not make a single appearance in court. Throughout the trial, Khaw defended Lee and asked the lawyers to keep her out of it, claiming that she was not involved in the experiments. Now, his surviving children are alone, victims of an elaborate scheme staged by their father.

This feature was first published in the November 2018 issue of UNRESERVED.

Related: He Killed 2 Women and Put 1 in a Bag 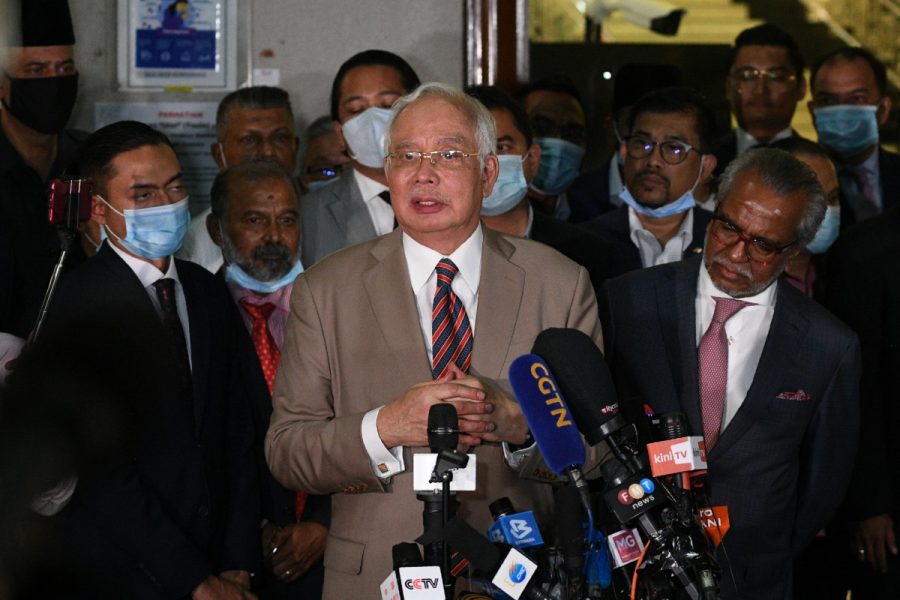 Goldman Sachs and Malaysia Sign Off On US$3.9 Billion 1MDB Settlement
By Sherelyn Goh